Brilliant suggestions, cute complaints or even praise & worship? Bring it on!

Or, really confidentially, via email:
» inout@datadealer.com

Quick update: We have now reached around 250 active games, and have sadly also come across several bugs in the last couple of days. 20 of them are minor, 5 are medium, and one is a real biggie: Some users are unable to finish missions, they cannot progress in the game and are consequently stuck. We call these occurrences „Heisenbugs“ because we have not yet been able to reproduce them. As soon as we look, they disappear. Very annoying!

Many THX for all the enthusiastic help from the affected users in hunting out the bugs & apologies to everyone else. This only affects 20 out of 250 users, but it’s very complex stuff and as long as we don’t understand what is happening in our database (our REAL database) and manage to fix it, we have to postpone sending out any further invites.

Sorrysorry, since the Beta went online we’ve been working non-stop on support and debugging, and with a couple hundred users more our inboxes and task lists would explode...we’ll let you know as soon as we fixed this issue, and for the time being ask for your understanding.

PRISM as a Game!

[UPDATE] If you had access to all the same data as Edward Snowden, what would you do with it? Ever wanted to run your own Smoogle & Tracebook, track your users & pass it over to some governmental agency? Now you can.

Data Dealer is a game that lets you play God with other people's data. Become Larry Page, Mark Zuckerberg, or even Edward Snowden, as you control the flow of data-- and the price tag that comes with it. And decide for yourself whether they´re heroes or traitors!

For the last two years we´ve been working hard on Data Dealer, a browser game about collecting, processing and selling personal data. For example it looks like that:

Note: Any similarities with people alive, other authorities or real world incidents are purely accidental and not intended.

Your mission: Create businesses and online ventures of all kinds, build up your data empire & collect millions of detailed personal profiles. Add some data delicaries from underground sources and share it with other companies or with the government.

Experience the power of having access to global info just like the NSA! Every dirty detail counts: Turn your database into a money machine. Even the tiniest details could be worth their weight in gold: 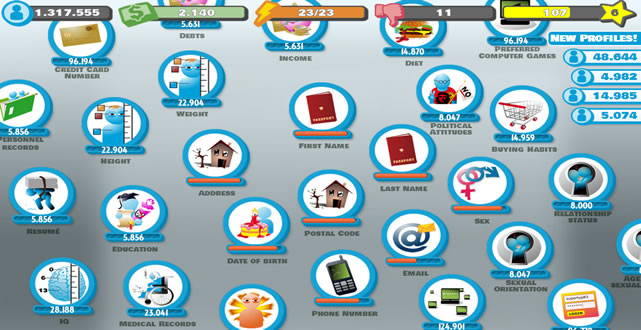 Privacy? Screw that. Turn the tables! Become a data dealer and get all the dirty details on your friends, neighbors and the rest of the world. Legal? Illegal? Whatever.

Check out the video trailer, play the demo or like us on your social network of trust:

By the way: Data Dealer has been created by a small team mainly from Vienna, Austria. It´s a nonprofit project and published under CC. The English demo was released a few days before the NSA/PRISM thing has been revealed. What a coincidence! Read more about our project here. Or watch this TEDxVienna talk, where one of the creators spoke about health insurance companies using "self tracking" data, data brokers like Acxiom or Lexis Nexis Risk Solutions, and about the development of Data Dealer.

Eric Schmidt: "You have to fight for your privacy or you will lose it" 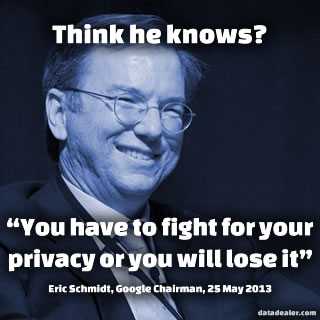 Privacy? Screw that. Turn the tables! Data Dealer is a critical online game about personal data and privacy.

Data Dealer is a social/serious/impact game about collecting and selling personal data - full of irony and gleeful sarcasm. It aims to raise awareness of personal data and privacy issues in a new and fun way. Now the English version is available on datadealer.com and playable for free – via web browser, no download required.

Learn how to trick your users and make cash with their personal data!

Players run all kinds of companies and online ventures - from dating sites, mobile apps to search engines and their own social web. On the way to becoming the world's most powerful data tycoon, they obtain data from a variety of sources – whether legal or illegal - and ruthlessly sell it to insurance companies or human resources departments. Their growing data empires have to be defended against hackers, complaining citizens, critical media and pesky privacy activists.

Data Dealer is currently being developed by our small team based in Vienna, Austria, with support from collaborators from Germany, Switzerland and the US. And it´s more than just some fancy idea: About a year ago we released the German demo, which received amazing media coverage and a huge response from the online community. We’ve been working on the full-featured multiplayer version since last autumn, and it´s now about 80% completed. It will be much bigger and much more exciting than what you can already see in the demo. But we decided: It´s high time to enter international waters - and to let you participate in the further development.

Data Dealer is a non-profit project, released under a Creative Commons license and based on HTML5 instead of Flash. The HTML5 portion and the development of our own game engine have been especially tricky.

Did we already mention, that we’d love to hear from you? All feedback is welcome and will help us to make Data Dealer even better! Either post it on our lovely FB page facebook.com/datadealer or simply use email: inout@datadealer.com (super-confidential!)

The demo shows the basic gameplay: collecting profiles, importing them into your database and re-selling them again. And then there’s a few other things to play around with as well. But some important parts are still missing:

As mentioned the full-featured version is already 80 % finished and we’re hard at work to get it to you as soon as possible. Our budget is limited, but we’re doing our best!

By the way: Data Dealer is based on lots and lots (and lots) of research. If you want to know more about the whys and wherefores of our game, we compiled a report containing background information and many links about the game contents.