We won the Games for Change "Most Significant Impact" Award 2013!

Attention and Accolades
Amazing media coverage, awards, conferences, exhibitions: Data Dealer has been featured in German National TV and covered by tabloids as well as by prominent high-profile newspapers.
▶ datadealer.com/coverage

All images can be used free of charge for editorial purposes. Use the remark "(c) datadealer.com CC-BY-SA". 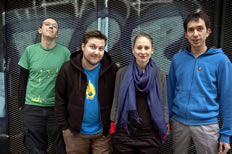 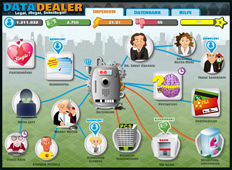 A small team from Austria has developed the new online game Data Dealer, which aims to raise awareness of personal data and online privacy issues in a completely new, ironic and fun way. At first glance the game looks similar to popular Facebook hits like Mafia Wars or Farmville. But in Data Dealer players face a very different challenge: their goal is to collect personal information about millions of people - and then ruthlessly sell it to clients of all kinds. Data Dealer is an online game about collecting, combining and selling personal data – and therefore a playful exploration of online privacy issues. The game is targeted at both young people and adults. Data Dealer is a nominee for the NYC-based Games for Change Awards 2013 - the leading international event about games with a social impact.

The German demo, released in 2012, received outstanding media coverage and a round of applause from the online community. Now the international version is available on datadealer.com and playable for free – via web browser, no download required. With the full game 80% finished, the creators made the decision to go international and let users participate in the further development.

The goal of the game is to “Rise from small-time back room dealer to mighty data mogul”. In Data Dealer, players take on the role of unscrupulous “data dealers”, collect personal data all over the internet, and learn how to turn this information into cash. They run all kinds of companies and online ventures - from dating portals and loyalty card systems to search engines and their own social web. On the way to becoming the world's most powerful data tycoon, they obtain data from a variety of sources – whether legal or illegal - and ruthlessly sell it to insurance companies, human resources departments and other clients of all kinds. The Data Dealer world is a vast underground economy full of shady characters selling intimate details. And of course, the Data Dealer's growing empire has to be defended against various threats, including competing players trying to hack into their databases, complaining citizens, critical media and pesky privacy activists.

By selling the collected data players earn good money – and it´s not just marketing agencies that show a certain interest. In addition to banks and insurance companies, human resources departments of big businesses are also on the client list. The game draws critical attention to the fact that extensive personality profiles can be created by automatically processing and combining the huge amounts of personal information readily available in today´s digital world. In extreme cases, the people behind the profiles can be blacklisted –without their knowledge. They might then be denied apartments and jobs; or at least have to pay higher insurance premiums or rates on loans.

Data Dealer is brimming with digs at big companies and celebrities. For example, the social network operated by players is called Tracebook. For marketing purposes, they have the choice of hiring a former basketball superstar or a real estate tycoon of questionable ethics (and hair style). One of the key figures in the underground economy turns out to be somewhat similar to a former chairman of the NASDAQ stock market. The developers of Data Dealer are mainly based in Austria, which may be the reason for certain oblique references to a well-known California politician, or a skydiving stratosphere stuntman.

Background: Personal Data And Privacy In the Digital Age

The creators of Data Dealer did a lot of in-depth research, so most of the stories in the game are based on real life. In the digital age virtually everything we do is recorded, monitored or tracked in some way. As a result, the quantity and the value of personal data of all kinds being collected today is vast: our profiles and demographic data from bank accounts to medical records to employment data. Our web searches, the sites we visit, our likes and dislikes and purchase histories. Our tweets, texts, emails, phone calls and photos as well as the coordinates of our real-world locations. In addition, today’s everyday services relying on aggregated personal information are becoming more and more complex - even if they look simple on the surface. When using today´s information technology it's more difficult than ever to estimate what the long-term consequences might be.

Data Dealer turns privacy abuse into a game and seeks to answers questions like: what kinds of personal data exist? Who is collecting this data and what are their intentions? What could this data be used for and what are the possible impacts on individuals? By switching perspectives and becoming ruthless data dealers, the motivations and concerns of data brokers can be experienced from the other side. Data Dealer educates about critical issues in today´s information society – but refrains from preaching on what to watch out for and communicates through contemporary digital popular culture, rather than warning against it.

Unlike most Facebook games, Data Dealer doesn´t use Flash but instead cutting-edge HTML5 technology. In addition, the project is a non-profit and licensed under Creative Commons. The previous development was made possible through funding from the creative agency of the City of Vienna, the Internet Foundation Austria – owners of nic.at - and through the dedicated efforts of the team. The small development team and their collaborators from Germany, Switzerland and the US, have already invested more than 10.000 hours of hard work since 2011.

The release of the German demo in 2012 led to a massive response from the general public. Data Dealer was featured on national TV and radio broadcasts in Germany, Austria and Switzerland and covered by tabloids as well as in several relevant high-profile newspapers. The internationally well-respected German newspaper FAZ, for example, wrote: “the online game Data Dealer transforms inexperienced Facebook users into astonished data dealers. Their work could accomplish what no warning advice, no explanatory article and no lesson are able to achieve." Data Dealer has also received several prizes, including the “Paedi” – an important German e-learning award – and a jury award at the Austrian National Multimedia Prize. Furthermore Data Dealer has been exhibited at the Austrian Ars Electronica Center – which is known as the host of the “Prix Ars Electronica,” one of the world´s most prominent prizes in digital arts.

Future Plans: From The Demo To The Full-Featured Social Game

As of May 2013, the playable demo version of Data Dealer is available on datadealer.com. A video trailer offering a glimpse of the full-featured game was released on Youtube. Finally (and fittingly), the Facebook page address facebook.com/datadealer will be the main information hub of the project. The demo shows only a small part of the work completed thus far. The full version of Data Dealer is nearly finished and will be launched within the next few months. Data Dealer aims to gain at least 100,000 players – hopefully even more. The developers believe that they have discovered a highly innovative approach to raise awareness of the burning issue of personal data in the digital era.