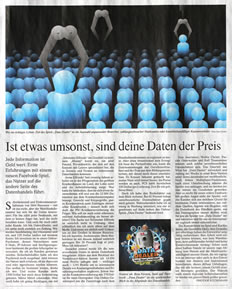 The German high-profile newspaper FAZ wrote: "The online game Data Dealer transforms inexperienced Facebook users into astonished data dealers. Their work could accomplish what no warning advice, no explanatory article and no lesson is able to achieve."

The German demo release in 2012 was a big success. Data Dealer was featured on national TV and radio broadcasts in Germany, Austria and Switzerland and covered by tabloids as well as in several prominent high-profile newspapers. Data Dealer has also received several prizes, including the “Paedi” – an important German e-learning award – and a jury award at the Austrian National Prize for Multimedia. Furthermore Data Dealer has been exhibited at the Austrian Ars Electronica Center – which hosts one of the world´s most prominent festivals in digital arts. Data Dealer won the French e-virtuoses Serious Games Award 2013 and the Games for Change Award 2013!.

Since the English demo release in May 2013 we´ve received feedback from all over Europe, the US and from many other countries. Hellyeah!

Satirical PRISM-Inspired Game Lets You 'Play God' With Personal Data
By Anita Li. "What if you had control over millions of Internet users' personal data? Players of a new game called Data Dealer can experience that first-hand by running their own 'Smoogle' and 'Tracebook,' while collecting and selling user data."
▶ Mashable

A Game That Plays With Private Information
By Betsy Morais. "Data Dealer, which is intended for players ages eleven and up, aims to change their online behavior."
▶ The New Yorker

Play The Part Of A Nefarious Data Dealer And See Our Privacy-Free Future Up Close
By Ben Schiller. "You would probably be shocked to find out how much marketers and companies know about you from the information you put on the Internet. In this new award-winning game, you can see what it’s like to try to grab and monetize people’s private data."
▶ Fast Company / fastcoexist.com

Legal? Illegal? Whatever – Data Dealer Offers Up Privacy Awareness In Great Gaming Style
By Lee Munson. "You don't care about information security or data privacy because they are boring subjects spoken about by geeks and old men with beards. But you SHOULD care and you should have fun learning about the risks posed to YOU. So play Data Dealer and learn in a very different way."
▶ Security-FAQs

Creating a Data Empire (with Uncle Enzo and Steve Sneak)
By Sam Pfeifle. "Will this game be successful in educating people about how data is used? Almost definitely."
▶ International Association of Privacy Professionals

Be a dirty data dealer!
By Charles Arthur. "This game is just like real life!"
▶ The Guardian

Privacy? Screw that.
By Rebecca Bowe. "Privacy. It’s heating up as a focal point for activists, and evidently some of them have slick graphic design skills"
▶ San Francisco Bay Guardian

Data Dealer: Just a Fun Game About Mining Personal Information
By Andy Cush. "Ever wish you could see the other side in the massive dance of privacy violations, data collection, and all-around snooping that characterizes our life online today?"
▶ Animal New York

Screw Privacy: English Version of Data Dealer Launches
"The game mixes gameplay about surveillance, personal data and privacy with some witty humor and some mild mockery of the world's biggest online destinations."
▶ GamePolitics.com

Another stub: Data Dealer
By Roberto Plankton. "A game that wants something. It wants you to be aware of your actions [...] an entertaining read as well, satire-heavy and a little silly from time to time [...] I think that deserves a hug."
▶ destructoid.com

Today's Webtip: Data Dealer
By Dave Dempsey. "A group from Vienna has decided to turn privacy abuse into a game. Not a standard desktop game, mind you, a Facebook game. Oh the irony!"
▶ FM4 (AT)

Data Trafficking as Facebook Game
By Michael Leitner. "A small development team in Vienna is drawing attention to a social game that trades with data [...] the players are entertained and enlightened."
▶ futurezone (AT)

Since autumn 2012 the further development of Data Dealer has been funded by the Creative Agency of the City of Vienna Departure, the Austrian Federal Ministry for Education, the Arts and Culture and the Internet Foundation Austria, owner of nic.at.